For as long as humans have gazed upward to the sky, there are many who gazed is awe at the site of the Moon in our sky. For many thousands of years the Moon has been both a source of inspiration and terror in all cultures around the world, with various appearances being classed as either a good or bad omen.

The fact that the Moon occasionally pases directly in front of the Sun to create what we refer to as a Solar Eclipse is simply a quirk of luck for humanity. The Moon and Earth are moving away from each other, due to gravity every year, it is only a small amount, but it adds up over millenia, at at present the Moon is 400 times closer to Earth that the Sun, but it is, coincidently 400 times smaller than the Sun too, so every few years, when the Lunar orbit is angled right, and the position in the orbit is correct, the Moon passes directly in front of the Sun, giving humanity an amazing site, and a full view of the Sun’s broiling outer atmosphere, the Corona, something that is normally hidden from our view by the glare of the solar disk. Also visible during a Total Solar Eclipse is a phenomenon called “Bailey’s Beads”, this is where some of the light of the Sun gets pased valley’s and other areas of the Lunar surface and we see a “diamond ring” effect.

However, before we get ahead of ourselves, lets do a few basics..

Generally, an eclipse is defined as;

There are two types of eclipses we can generally see from Earth that involve the Moon as the Earth and Moon move around their common centre of gravity, the Moon appears to move infront of countless stars and even many of the bodies within the solar system, but here I will worry about the two main types that we can all witness easily with our eyes and that all cultures, from the earliest recorded history, some cave paintings and rock art are now thought to depict both Lunar and Solar eclipses, but certainly since written history was recorded so have these astronomical events, paying crucial roles in many cultures.

A lunar eclipse is caused by the Moon passing through Earth’s shadow and either partially or totally blocking the light from the Sun. This phenomenon is relatively common since all it requires is that the Moon and the Sun line up. When it occurs, the side of Earth turned away from the Sun, thus night side, will see the Moon darken as it enters the shadow of Earth.

Earth’s shadow can be divided into two distinctive parts: the umbra and penumbra. Earth totally occludes direct solar radiation within the umbra, the central region of the shadow. However, since the Sun’s diameter appears about one-quarter of Earth’s in the lunar sky, the planet only partially blocks direct sunlight within the penumbra, the outer portion of the shadow.

A penumbral lunar eclipse occurs when the Moon passes through Earth’s penumbra, or the outer part of the shadow. The penumbra causes a subtle dimming of the lunar surface, which is only visible to the naked eye when about 70% of the Moon’s diameter has immersed into Earth’s penumbra.

A partial lunar eclipse occurs when only a portion of the Moon enters Earth’s umbra, the darkest part of the shadow. The Moon’s average orbital speed is about 1.022 km/s (3,679.2km/hr {2244.312mph}), or a little more than its diameter per hour, totality may last as long as 107 minutes. Nevertheless, the total time between the first and the last contacts of the Moon’s limb with Earth’s shadow is much longer and may last up to 4 hours.

The relative distance of the Moon from Earth at the time of an eclipse can affect the eclipse’s duration. In particular, when the Moon is near apogee, the farthest point from Earth in its orbit, its orbital speed is the slowest. The diameter of Earth’s umbra does not decrease appreciably within the changes in the Moon’s orbital distance. Thus, the concurrence of a totally eclipsed Moon near apogee will lengthen the duration of totality.

A selenelion or selenehelion occurs when both the Sun and an eclipsed Moon can be observed at the same time. This can occur only just before sunset or just after sunrise, when both bodies will appear just above the horizon at nearly opposite points in the sky. This arrangement has led to the phenomenon being also called a horizontal eclipse.

Typically, a number of high ridges undergoing sunrise or sunset can view it. Although the Moon is in Earth’s umbra, both the Sun and an eclipsed Moon can be simultaneously seen because atmospheric refraction causes each body to appear higher in the sky than their true geometric positions.

A solar eclipse occurs when the moon “eclipses” the sun. This means that the moon, as it orbits the Earth, comes in between the Sun and the Earth, thereby blocking the sun and preventing any sunlight from reaching us.

There are four types of solar eclipses

Annular solar eclipse: The moon blocks out the sun in such a way that the periphery of the sun remains visible. The unobscured and glowing ring, or “annulus,” around the sun is also popularly known as the “ring of fire.” This is the second most common type of eclipse.

Total solar eclipse: As the word “total” suggests, the moon totally blocks out the sun for a few minutes, leading to a period of darkness — and the resulting eclipse is called a total solar eclipse. During this period of darkness, one can witness the solar corona, which is usually too dim to notice when the sun is at its full glory. Also noticeable is the diamond ring effect, or “Baily’s beads,” which occurs when some of the sunlight is able to reach us because the moon’s surface is not perfectly round. These imperfections (in the form of craters and valleys) can allow sunlight to pass through, and this appears just like a bright, shining diamond.

How we witness an eclipse depends on many factors, where the Moon is in its orbit, where we are on the Earth’s surface in relation to the Moon and where the Earth is in its orbit about the Sun as that determines the Suns relative position in the Sky.

The above image shows what is called an Analemma, The sun’s positions in the sky is photographed from the same location at the same time of day throughout the course of a year, the images lie on a closed curve . The photo shows the apparent swinging of the sun from its northernmost position, at the analemma’s uppermost point, at summer solstice, to its southernmost position, at winter solstice. We can only see a solar eclipse if the position of the Moon in the Sky coincides with the position of the Sun at the time.

The image above gives a pictorial representation of what is happening and when an eclipse can occur.

Eclipses involving the Moon, regardless of type, are fascinating examples of how lucky we are to be living today, a few million years in the past or the future and the eclipses as we experience them would not happen due to the orbital recession of the Moon at a rate of 3.8cm/year (Pogge 2005), or around 380km per million years.

The Moon is the second largest natural satellite in the solar system in relation to it’s parent planet, only Charon and Pluto have a higher proportion relative to each other.

Of the approximately 219 natural moons that orbit planets or dwarf planets in the solar system, our Moon is the 5th largest, only Ganymede, Titan, Callisto and Io are larger than our Moon.

Now lets take a look at the physical parameters of our wonderful Moon.

Table 1: The Physcial properties of the Moon

Many people believe the Moon the to devoid of atmosphere, but this is not actually true, it may be very tenuous, it may be non-existant comnpared to Earth, but it does exist.

Table 2: The properties of the Lunar Atmosphere

A cloud of hydrogen atoms, known as the geocorona, makes up the distant reaches of the planet’s atmosphere. The geocorona’s full extent has long been a mystery, and Apollo astronauts captured a picture of it glowing in the Sun’s ultraviolet rays in 1972 without realizing that they were inside it.

Between 1996 and 1998, the newly operational Solar and Heliospheric Observatory (SOHO) gazed Earthwards and mapped the geocorona three times. The measurements made by SOHO’s sensitive detectors during this period show that the hydrogen cloud peters out about 630,000 kilometres from the planet — well beyond the distance at which the Moon orbits.

Researchers, led by Igor Baliukin, at the Space Research Institute of the Russian Academy of Sciences in Moscow made the discovery only recently while digging through the SOHO data archives. Astronomers should be aware of the geocorona’s ultraviolet glow and how it might affect observations from future space telescopes, says the team.

The surface of the Moon was mostly unknown to science until Apollo 11 touched down in 1969. Of course we knew it had mountains, valley’s, rilles, craters and other geological features, but the material that made up the surface was mostly guess work, some good science and theories, but nothing really provable.

Since the Apollo era, with the recovery of lunar rocks and regolith, with more capable orbitors and landers, we now know a great deal about the our moon’s chemical composition.

As with most larger bodies, those larger than around 400km in diameter that have undergone isostatic equilibrium due to their gravity, the Moon is  layered. At the centre, obviously, is the Lunar Core, this only accounts for about 20% of the diameter of the Moon. It is believed that the lunar core is made of metallic iron, with small amounts of sulfur and nickel, and is, at least, partly molten. The Core itself, may be seperated into three parts, with the solid inner core surrounded by the liquid outer core and then a layer of parytially melted material.

Next we have the Mantlehe which is believed to extend up to a distance of only around 50 km below the surface of the Moon. It is  believed that the mantle of the Moonmay be composed largely of the minerals olivine, orthopyroxene and clinopyroxene, the lunar mantle is also believed to be more iron-rich than Earth’s.

The crust of the Moon may only reach down to 50km from the surface, much thinner than Earth’s crust, which can be several hundred km thick. Thanks to the Apollo program and multiple lander/orbitor missions, this is the part of the Moon we know the most about, although there are still discoveries being made.  The lunar crust is composed mostly of oxygen, silicon, magnesium, iron, calcium, and aluminum, but there are trace amounts of titanium, uranium, thorium, potassium and hydrogen and a handful of other chemical elements. 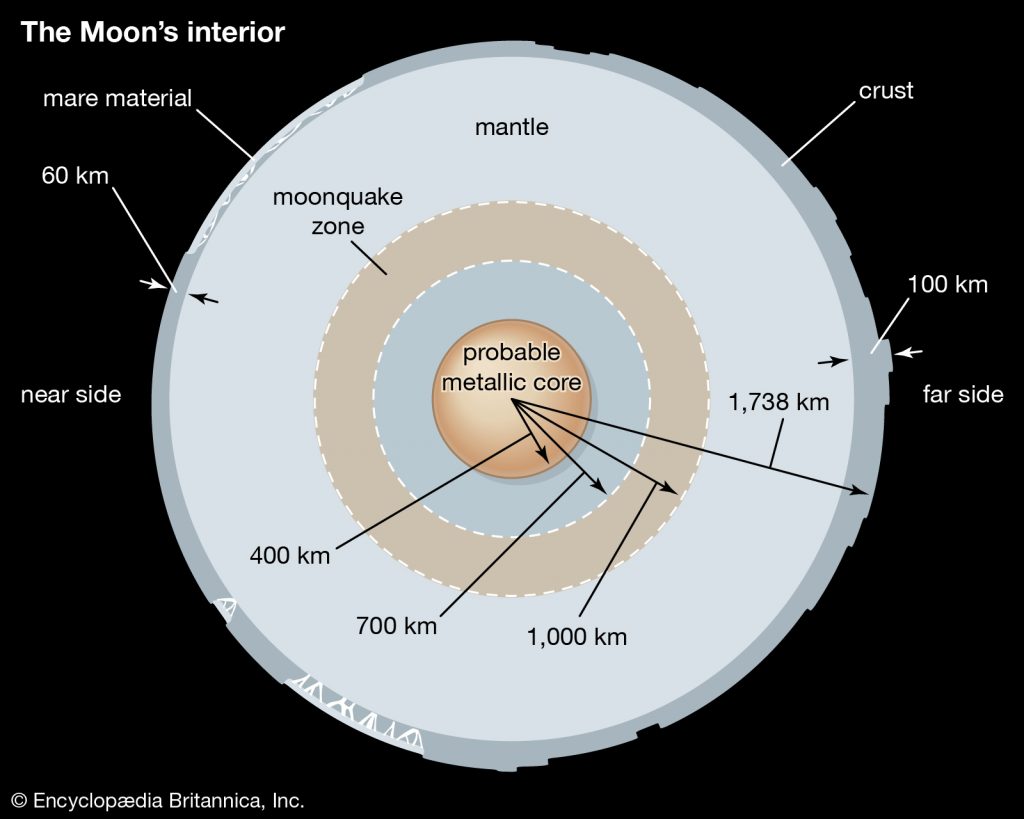